Again, it's been awhile and not much stitching.   I've been working sporadically over the winter on Primitive Santa.   I  changed the border quite a bit. I didn't like the original border,  even though it's more "primitive" looking. Excuse the wrinkles, please. It's been a bit of a stitching slump for me and I'm not sure it's over yet.  I have, however, worked a little on my Sampler Life SAL that has turned into just a sampler of blocks.  The first 3 rows and one block on the 4th row are from the Sampler Life SAL. The remaining bottom blocks are ones I've either found somewhere or I've altered to fit the 50x50 block format.  I'm having a hard time finding blocks that fit in that format so any suggestions are appreciated.  Right now I'm just playing with stitches and colors in the current block.  I may continue with that for the last few blocks until it's finished. 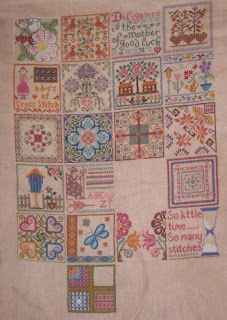 I finished Small Rustic Composition yesterday.  It was a kit from DMC and a gift.  The kit came with lovely minty green aida but there was a permanent crease in the middle of it so I switched to something I had in my stash. 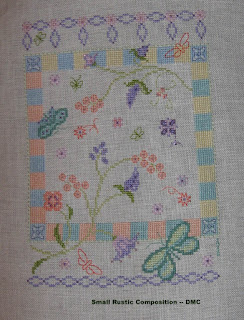 I also finished a few more squares for the Sampler Life SAL. 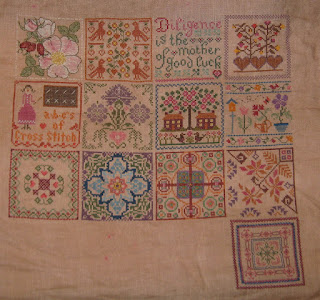 And then when I dug out my iron to press the Small Rustic Composition, I came across 3 other smalls that I finished earlier this year but totally forgot ... duh. 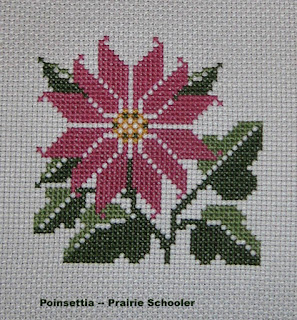 Well, it's been over a year since I've been here.  I've been in a major stitching slump and am trying to get out of it.  Here's what I've stitched over the last year.  It's not much but I hope there will be more to come. 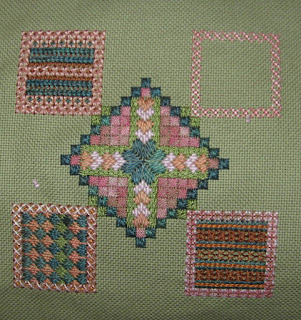 The above sampler is based on one from DMC that uses all their new floss colors.  I don't really like their color combination so I changed it and am using different types of threads besides floss.  I also changed the stitches in the four corner blocks. 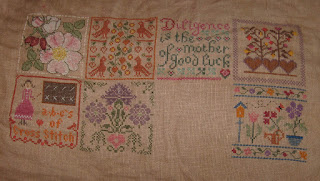 This is a SAL from The Sampler Life Facebook page.  Each square is a different designer and is released monthly.  It's still going on if anyone is interested in joining in. 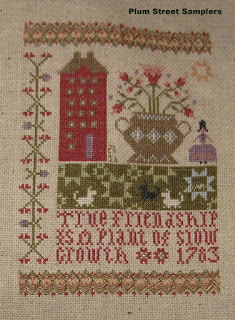 And this is from Plum Street Samplers and is actually finished!  I added the top and bottom borders just for fun.  I love this quote by George Washington:

True friendship is a plant of slow growth, and must undergo and withstand the shocks of adversity, before it is entitled to the appellation.

I finished this pretty little lady a few days ago.  Because I inadvertently made her 2 columns thinner (who would complain about that?) and 2 rows shorter (bummer!) I adjusted the border a bit. 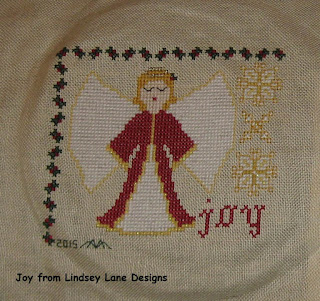 There is a new Christmas ornie SAL starting in August which I've joined.  Since I am already stitching some Christmas ornies this year, it seemed the perfect SAL to join.  The subject for August is Santa and happily, Santa was on my list for next month ... doubly perfect.

It has finally stopped raining in Pennsylvania (hooray!) and the beags took time to catch some well deserved rays. 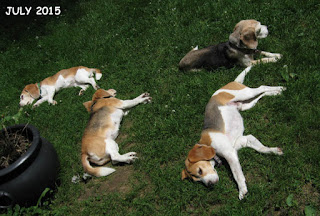 Not much to show since last month.  Just a few smalls (I don't fell like working on the big projects right now).   I did, however, remember to take a picture of Autumn Log Cabin's progress from June.  It wasn't much but every little bit gets it closer to 'done'. 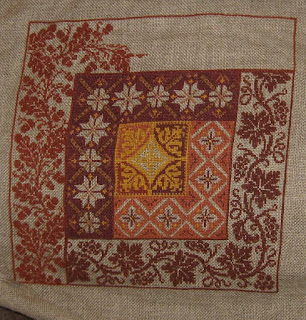 My haunted house for the Halloween Ornament SAL is from Handblessings.  I changed the look of this one significantly by changing the threads and fabric. 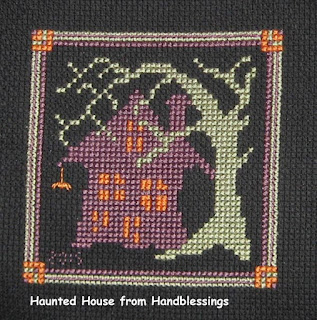 And finally, a group of snowmen from Prairie Schooler.  These will be made into ornaments for kids stuck in the hospital over Christmas.  All except the little one.  We were supposed to stitch on 14 ct fabric but I mistakenly grabbed 18 ct instead for the first one.

I'm afraid my whole stitching schedule has gone to hell and probably won't get back on track for awhile.  My dad died over a month ago.  My mom died 14 years ago.  I'm sure they're glad to be together again but I miss them both. 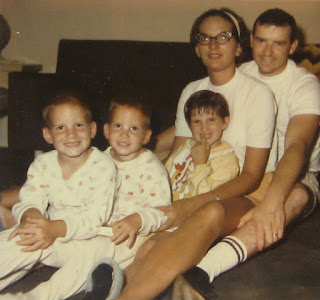 Not much stitching to show .... May was a super craptastic kind of month .... but here's what I stitched so far this month.

First up is Frank N Stein from Pickle Barrel Designs and my choice for June's Halloween Ornament SAL.

The designer had him in 3 pieces but that's too much finishing for me .... sooooo, I put him back together as a whole monster and now he's    A L I V E!
My second piece is a Facebook group project.  It's a little quilt that's making it's way through our group and will be auctioned off to benefit cancer.  The theme is woodland things.  I picked a bluebird and flowers from a pattern that was gifted to me (Joyful Summer from CCN). 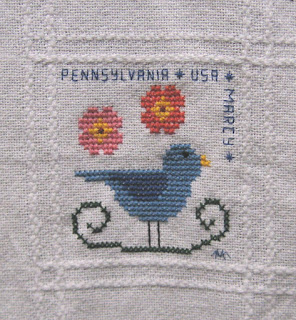 And while I was at it, I took a picture of the whole quilt to date ... isn't it adorable? 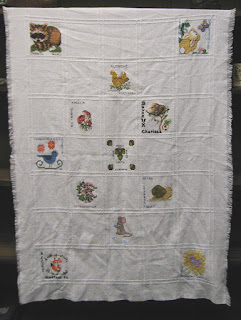 I guess since I used part of a gifted pattern, this will be June's Gifted Gorgeousness update.
Oh!  I almost forgot .... I did a little on the Autumn Log Cabin in May but didn't get a pic of it yet.  That'll be for the next update ... unless I forget again ;)
Posted by Marcy at 1:01 PM 8 comments: 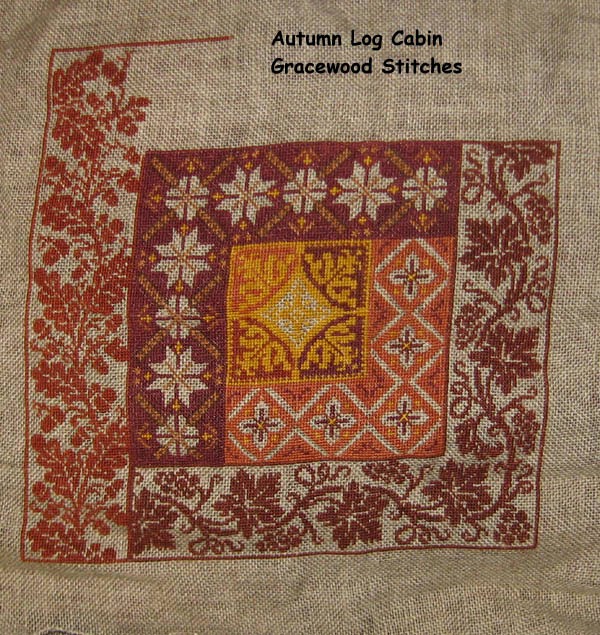